Main / Articles / What is Decentralized Exchange?

What is Decentralized Exchange? 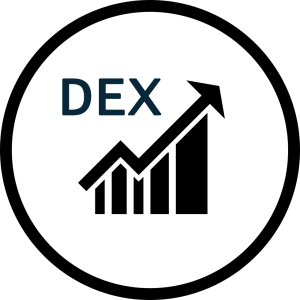 A decentralized exchange is a platform on which it is possible for users to sell and buy cryptocurrencies to each other without the intervention of a third party, intermediary or regulatory authority.

At this time, there is an increased demand for this kind of websites among users, since they open up a number of undeniable advantages over traditional cryptocurrency exchanges. The advent of cryptocurrencies has caused a stir in the financial environment. After all, anyone can transfer or exchange cryptocurrency directly, without using a bank, providing documents and without the supervision of government agencies. In fact, the blockchain technology has introduced a mechanism for direct interaction between the buyer and the seller. No one can interfere with the transfer or claim the origin of funds.

Basically, all these services need the client's personal information. They can be dishonest, collect confidential information for personal purposes, and can also be susceptible to attacks or hacking. To buy on a centralized exchange, you must provide a bunch of information about the owner of the bank account, card, origin of funds and comply with the KYC policy. The paradox is that in order to start using a decentralized exchange, you first need to get money through a centralized one.

Decentralized exchanges provide users with fast and secure trades among themselves. At the moment, there is no exchange that changes fiat for cryptocurrency. The functionality of such exchanges is reduced to the exchange of one cryptocurrency for another. This article is devoted to the work of such sites, we will analyze their work, the pros and cons, and also list the largest of them.

In addition to centralization, there is a question in the storage of cryptocurrencies. When using the exchanges familiar to us, the question arises of the safety and ownership of the coins that are stored there. For example, if you bought bitcoin on the exchange, then it will be displayed on your account balance. In fact, the exchange will own bitcoins and show their balance, no more. For full control over your coins, you need to request the withdrawal of coins to a cold wallet, or a wallet whose private keys are stored with you. Until then, the exchange can do whatever it wants with bitcoins. This drawback of exchanges is the main one due to which the possibility of direct exchange is sought. Every year, there is even a SAFU promotion, which encourages all exchange users to withdraw their coins to private wallets one day a year.

Decentralized exchanges give users full control over coins at all times. Using such exchanges does not force you to replenish your balance or add coins to the exchange account. When performing an exchange, one cryptocurrency is directly converted to another using a smart contract or an exchange gateway, which acts as a guarantor of the transaction. This method gives an advantage in speed and safety, allows you to automate processes with less effort, but there are still points to be wary of. If there are problems with a smart contract, there is a possibility of permanently losing access to your coins, as it was in the DAO.

What is centralization for?

The question arises. Why centralize exchange processes at all? You can simply take and exchange a crypt for a crypt without any exchanges. The only question is where to find a counterparty who, in a given period of time, needs a reverse exchange for the same amount on the same conditions. It is usually impossible to find such a person on your own. To search for opposite pairs of orders, an exchange is required. Its order book displays all user orders with quantity and current price. The exchange process consists in bringing matching pairs with each other on a specific server. For this, the exchange takes its commission and everyone is happy.

The process of work of a decentralized exchange takes place on many computers of the users themselves, on smart contracts of cryptocurrencies, or in the nodes of a certain cryptocurrency.

Decentralized exchanges operate on a network of many computers. Some, using smart contracts, function directly on the chain. Others rely on second-tier networks, using trusted nodes to find matches.

Now, decentralized exchanges only account for about 2% of the total exchange volume. The remaining 98% belong to centralized sites. However, let's not rush to think that centralization in this area is bad. There are people who think differently. Some people think that the concept of the exchange and decentralization are antonyms and that they are alien to each other. Only a stock exchange, which is some kind of organization, can conduct transactions efficiently, efficiently and quickly. Also, such organizations have experience in security, which an ordinary user may not have. The heads of the largest exchanges claim that the exchange is the most reliable place to store coins.

We disagree with this opinion and believe that a decentralized exchange has a place to be, and if certain inconveniences that exist now during their work are eliminated, such resources will be ideal when working with cryptocurrencies in the future.

The main and main advantage of such exchanges is the absence of intermediaries. This is the main philosophy behind the original creation of cryptocurrencies and this industry. However, decentralized exchanges have a number of other benefits.

To conduct an exchange operation on a decentralized exchange, you do not need to indicate your personal data. All you need is a public cryptocurrency address. When using a centralized exchange, you must indicate all information about yourself. In addition, some exchanges may refuse to conduct an operation, depending on the user's region, amount, or the origin of the coins. This is primarily due to legislation. The FATF policy forces all sites to comply with KYC and AML legislation, store user data, and provide law enforcement agencies with information on transactions of interest to them. Otherwise, such exchanges will be fined, or completely closed.
If decentralized exchanges gain popularity, they will most likely fail to meet the requirements of most countries. Because of this, developers mostly release exchanges as open source software.

2. Control over your coins

Coins are stored directly with you and not with a third party. There is no need to transfer control of the cryptocurrency to replenish the balance or wait for funds to be credited indefinitely. As a result, the user does not lose control over the coins until the very end of the transaction.

Hacking a decentralized network is much more difficult and resource-intensive than a service located on one service and storing millions. The expediency of such a hack sometimes tends to zero, since the cost of an attack can be several times the amount that will be received from the user's computer.

The probability of failure of many network nodes is much less than the failure of an exchange with one point of failure. Whether it's a DDoS attack or a server overload, the decentralized exchange continues to work. The same cannot be said about the services popular now. In addition, dishonest services during peaks of growth or decline in the rate can completely turn off the server, restrict access, or make it so that the user cannot place the necessary buy or sell order, thereby missing the moment for a profitable transaction.

The main disadvantage of such services is complexity. This creates problems for both the average user and the developers. The implementation of such sites should be simple and straightforward, which cannot be said about them yet.

Using third-party software of a decentralized exchange is much more inconvenient than going to Binance, for example. Sometimes interaction is possible only in certain operating systems, it is necessary to monitor the software and client version updates in order to be able to carry out a decentralized exchange. You also need to thoroughly study the principle of operation of the cryptocurrency that you are changing and the process of creating a node, which is necessary for exchange in some cases.

Decentralized exchanges do not have options such as margin trading, futures trading, or options trading. All functionality is reduced only to buying and selling.

The percentage of decentralized exchanges is extremely small and does not exceed 2% of the total volume. Trades can be small and may not meet the needs of most users. To attract new users, you need more liquidity, and for more liquidity you need new users. We have a kind of vicious circle.

The processing speed of applications on decentralized platforms is much lower than their usual counterparts. During the exchange, the currency price may change and such an exchange upon completion may no longer be relevant.

Due to the long exchange chain, there is a possibility that the transaction will freeze at the confirmation stage. At this moment, other transactions with a higher commission are confirmed faster and exchange on the current order. In this case, your application will be canceled. At the moment, the issue of preventing overtaking is a priority in the further development of such exchanges.

It is technically impossible to run an exchange with full decentralization. Some exchanges serve as a buffer for receiving and sending coins, while others create nodes that accept funds. A register of transactions and exchange information is also kept. In any case, there are places of centralization

We analyzed the work of top decentralized exchanges in a separate article: TOP 5 decentralized exchanges.
Although the market share of such projects is extremely low, in 2020 there was a significant breakthrough in its development. Some exchanges have increased their trading volume hundreds of times. Some of them managed to load the Ethereum network to such an extent that fees went up to $ 15 per transaction.

Top decentralized exchanges at the moment: There are a number of younger projects developing by leaps and bounds. Work with the Lightning Network and atomic swaps is relevant.

The future of decentralized exchanges

Due to the tightening of regulation of the crypto industry, the development of decentralized exchanges will occur faster every year. Although it is extremely difficult to achieve full decentralization, technology diffusion and the attraction of new users will be faster and faster. Even major industry players like Binance are launching decentralized counterparts. With the development of the industry, we will observe a decrease in the problems that the decentralized market is facing now, and the advantages will become more and more. In the future, we will see completely safe sites that will have sufficient liquidity, will have a low commission, and the exchange process will occur instantly. At the same time, operations to exchange cryptocurrencies for cash, such as exchanging usdt to usd or buying cryptocurrencies, will be carried out through the usual exchangers. In this area, the same decentralization is taking place: platforms like LocalBitcoins or Paxful are opening. However, the services that work there are ordinary exchangers.