The largest Bitcoin transfer ever 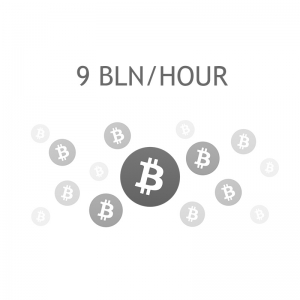 In the Bitcoin network, approximately 1.18 million BTC were transferred in one hour. This is the largest hourly transaction in the history of Bitcoin since the creation of the cryptocurrency. The price of BTC did not react much to this movement and amounted to just over $ 7,400 for 1 BTC. If you convert BTC into dollars, you get about $ 8.9 billion, which is also the largest transfer in the history of cryptocurrencies in dollar terms.

Who is behind the largest movement of bitcoins in history?

Behind this event is the Bittrex cryptocurrency exchange, which, in connection with the planned maintenance of the site, transferred coins from cold wallets. In total, about 21 transfers were made at about 56,000 BTC.

It should be noted that for the commission of each transfer, a total of $ 0.56 was paid. In total, the transfer of $ 8.9 billion in bitcoins cost a little more than $ 12. This is an indisputable advantage of the first cryptocurrency.

The reasons for the maintenance of the site are unknown. Most likely, the cold storage of the crypto site will be improved, which most cryptanalysts adhere to.

What to expect from high volume BTC transactions?

There was no panic among traders, there was no mass discharge, however, it alerted everyone. When transferring such large amounts, there is usually a sharp movement in the market, however, nothing happened in this case. In most cases, large amounts of bitcoins are transferred from users' wallets to exchanges for the purpose of immediate sale, or the distribution of bitcoins at different sites for simultaneous deferred sale in the next few days. Accordingly, you usually do not have to wait for the rate to rise, but on the contrary, there is a sharp decline.

The Bitcoin fee is ideal for transferring large amounts between accounts. This has been shown by the example of Ethereum. When hackers stole money from the Upbit exchange, massive large transactions began on the ethereum network. On average, up to 10 cents of commission had to be paid for one transaction up to $ 2 million. No bank or centralized payment institution can offer this. However, the reverse side is also worth noting: only the user is responsible for the transfer and keeping of coins. This is rather a plus, however, when making a mistake both in the transfer and in the storage of the cryptocurrency, it is practically impossible to return the funds.
go to articles list